Welcome to the March edition of the Wrestling Museum feature of Beauty in Wrestling. For the new readers, Wrestling Museum is a look back in time, focussing on a single match and how it compares to modern day. Think of it as the Back to the Future films except instead of a thirty-year-old pretending to be seventeen, your stars are some of the world's top wrestlers. Special effects are overrated anyway.

This month's match is Pegasus Kid vs. Jushin "Thunder" Liger. Older wrestling fans may remember "Pegasus Kid" as Chris Benoit's old alias while working for New Japan Pro-Wrestling in the early 90's. After a long absense from his matches with NJPW in the 80's, Benoit returned in 1990 under a mask to feud with Japanese sensation Jushin Liger. That February in the Tokyo Dome, Pegasus Kid and tag team partner Naoki Sano defeated Jushin Liger and Akira Nogami. Later that year, the Kid wrestled Liger one-on-one to capture the IWGP Jr. heavyweight title, which was generally reserved for Japanese grapplers until the likes of Benoit and Owen Hart (who was the first to take the belt) arrived. That would definately not be the last time Pegasus Kid and Jushin Liger were in the ring together, though. Their rivalry even spilled over onto American television in 1992 with a match of Benoit and Beef Wellington vs. Liger and Brian Pillman. Benoit and Liger didn't stop there, which brings us to our match. 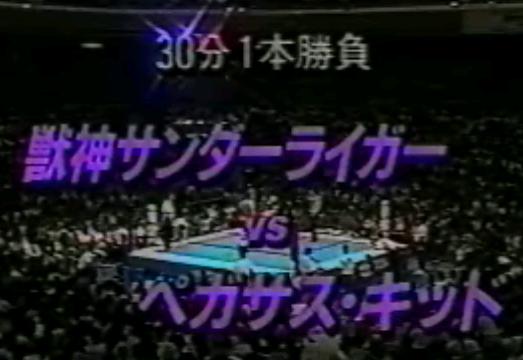 Japan. August 13, 1992. Pegasus Kid vs. Jushin "Thunder" Liger. Pegasus Kid is wearing his blue and white long tights with the Pegasus symbol on his rear. Liger is wearing his traditional over-the-top but oh-so-spiffy red outfit, complete with horned mask. The bell sounds, and we're ready to go.

Lock-up in the center of the ring. Pegasus takes Liger down with an arm drag. Quick lock-up again, but this time, Liger drags Pegasus to the mat. They both get up and stare each other down once more. Pegasus runs his hand through his long hair (young Benoit sported a mean half-mullet early in his career) and locks up once more with Liger in the middle of the ring. This time, no crisp, flawless takedown. Instead, Pegasus shoves Liger to the canvas, positioning himself as the aggressor, and makes a "c'mere" hand motion telling Liger to bring it on. Once Liger is close enough, Pegasus Kid grips his opponent's arm and wrenches it tightly. Liger knees his way out, throws Pegasus against the ropes, and shoulder tackles him to the ground. This time, Liger gives Pegasus the same mocking motion. Good opening. 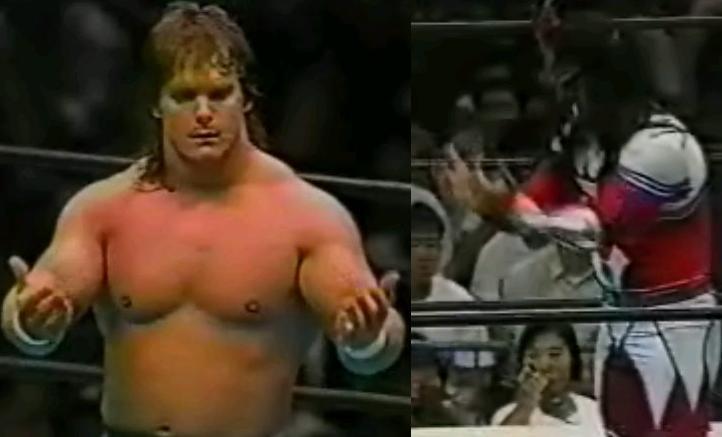 Benoit goes back to twisting the arm. Liger, a fast-paced cruiserweight, spins about and quickly tumbles his way out of the hold and into one of his own with enough force to spin Pegasus into a sommersault before he lands flat on his back. Not for long, though. Pegasus kicks up ("Shawn Michaels style" if that paints the picture) but can't come loose of Liger's grip on his arm. Pegasus performs a cartwheel to put himself in better position, not to mention impress the crowd, and reverses the hold. Liger, on his back, extends his boots over Pegasus' neck and thrusts him aside with his legs. They both get up quickly and give each other a frustrated look as the fans applaud the action.

Pegasus and Liger charge into a lock-up, but this time, Liger goes low, bringing down the Kid and latching onto his leg. Pegasus tries to pry his way out, gripping a variation of the crossface. To esacpe that, Liger changes positions so he is out of Pegasus' reach. Liger and Pegasus go back and forth from Liger's ankle lock to Pegasus' variation of a full nelson. Finally, getting more aggressive, the Pegasus Kid underhook suplexes Liger, seamlessly creating the position for the move out of the full nelson. Benoit was as technically sound and nearly flawless twelve years ago as he is today. Pin attempt by Pegasus. Liger quickly kicks out. Too early for the decision.

Pegasus lifts Liger up only to snapmare him back to the canvas and flow into another submission hold. This time a head scissors from behind. A kind of triangle choke. Pegasus working one part of the body which makes for a good psychological and believable match. Pegasus pulls Liger up vertical and chops the red-clad wrestler's chest. There's that Benoit chop! Pegasus throws Liger against the ropes. There's that Benoit left-handed clothesline! Notice that whenever he performs this most simple move, he waves his arms about just after, making it seem more intense. Benoit with a back suplex, landing Liger, once again, on his neck. He follows up with the triangle choke so seamless that it's hard to tell when one move ends and the other begins. 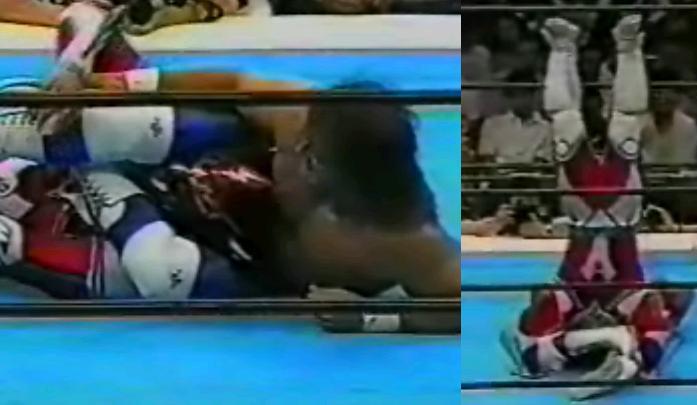 Jushin Liger turns his body 180 degrees so that he is now on his stomach. He stands on his head (seriously, his head!) and wriggles free so that he can float over and trap Pegasus in a crossface. The Kid sells it with a perfect scream. Pegasus gets to his feet so that the hold is now only a standing side headlock. Both men bound against the ropes but Pegasus gets the worst of the exchange as he is dropkicked outside of the ring. Liger charges the ropes, teasing a high-flying move, but only kicking himself off the ropes, taunting Pegasus Kid. Liger does the same again, but now, he dropkicks Pegasus stiffly through the ropes! Pegasus Kid goes flying backwards and into the steel guard rail. Liger "dusts" his hands off, and the fans eat it up. They are going nuts.

The referee exercises his DQ count until Pegasus finally makes his way back inside the ring. Liger nails Pegasus with a snap suplex into a pin. Two-count. Liger holds on tight with a sitting rear headlock. Then, changing his gameplan, Liger grips onto Pegasus with the triangle choke that the Kid used only a couple minutes ago. Pegasus will have none of it. He stands up while Liger is still latched onto him, holding the Japanese star in a "piggyback" position until Pegasus Kid leans back and crashes Liger down with an electric chair. Pegasus presses the attack. He leaps onto the top ropes with perfect grace and balance and tosses himself leg-first onto Liger's neck. Pin attempt. Two-count. Pegasus doesn't let up. German suplex into a bridge. Another two-count.

Pegasus gorilla-press slams Liger and forms what you'd swear was the old WCW version of Chris Jericho's Liontamer, an elevated Boston crab. Liger, while in the hold, lifts his body up as if he were doing a push-up, and rolls Pegasus onto his back, breaking the submission hold. 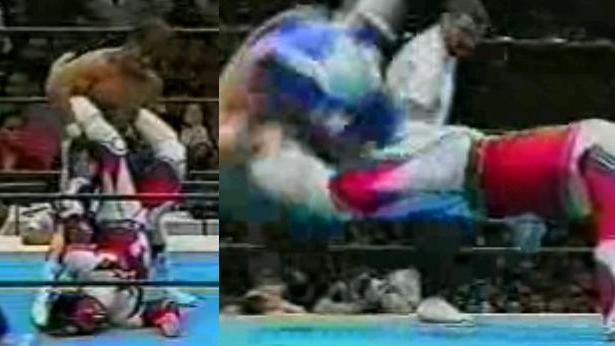 After a hard-hitting exchange, Pegasus climbs to the top turnbuckle again. In this attempt, Liger cuts him off before he can do any more damage. "Thunder" puts the Kid into the same electric chair move as was done to him before, but this time, from a much higher altitude. Pegasus and Liger come crashing down as the crowd goes wild. Liger over Pegasus for the pin attempt. Only a two-count. Pegasus against the ropes. Liger catches him with a tilt-a-whirl backbreaker. Another pin attempt and another kick-out by Pegasus Kid. Spinning heel kick by Liger catches Pegasus right on the jaw and forces him out of the ring once more. At last, we get to see Jushin Liger go aerial. He soars over the ropes to the outside on top of Pegasus Kid with a sommersault plancha. Not the most innovative move compared to the 450 degree splashes and shooting star presses into legdrops we can see today, but twelve years ago, planchas were still pretty neat. I suppose they still are now, in their own way.

The commentator seems very much into this match. I wish I knew what he was saying, but, like most Americans, I only know how to say "Thank you very much, Mr. Roboto" in Japanese. Anyway, back to the match. Liger is already back in the ring, so Pegasus makes his way to the apron to meet him with a shoulder thrust through the ropes to Liger's abdomen. With Liger stunned, Pegasus goes to the top rope. Alas, not quick enough. Liger meets him in the high-risk district and tosses the Pegasus Kid off the top and onto the center of the canvas with a belly-to-belly suplex. Nice spot. Liger into the cover but Pegasus refuses to die. Liger grows frustrated (I can only assume, not being able to see his facial expressions), climbs to the top turnbuckle while Pegasus is lying flat on his back, and leaps off with a flying headbutt. Pegasus Kid moves out of the way! Liger hands hard on his face. 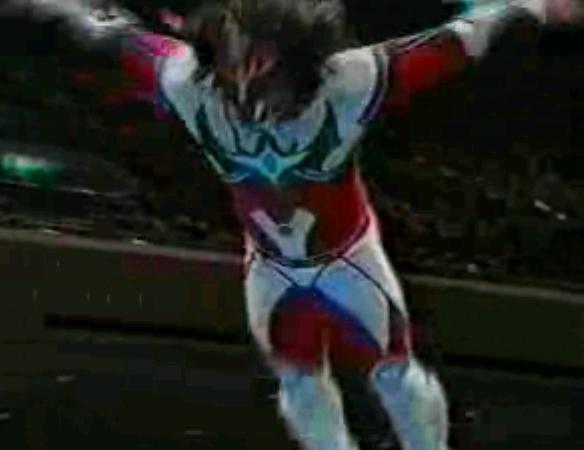 Pegasus seizes the opportunity and performs a series of suplexes into pins but it is to no avail. Pegasus loses it and forearms Liger, which is one of the very few punches we see in this entire match. This is no brawl, even though Benoit can do that too. This is mat wrestling with some acrobatics neatly inserted for good measure. Pegasus Kid positions Jushin Liger for an inverted piledriver but it is reversed so that Pegasus receives it instead. He lands hard but kicks out of the pin attempt. Pegasus against the ropes. Liger tries for another tilt-a-whirl, but the Kid lands on his feet, gets behind Liger and forces a backslide. One! Two! Kickout! The Japanese fans are loving it.

After throwing everything and more at one another, Jushin Liger places on Pegasus on the top ropes for a superplex but the Kid powers out of it, lifts Liger up, and destroys him with a top-rope powerbomb! One! Two! Three! It's over... 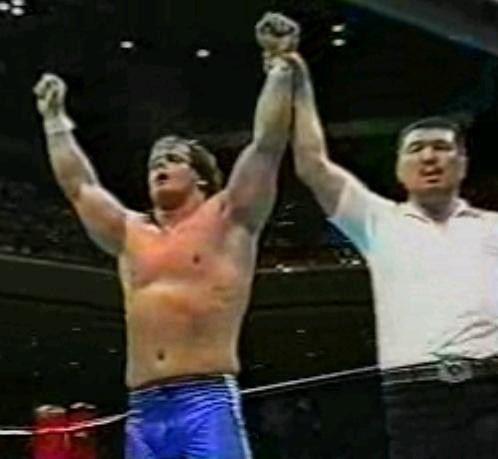 ...and our winner, Pegasus Kid!

Thank you for joining me for this month's Wrestling Museum match. Some of my readers may know that Chris Benoit is my favorite wrestler in the world today. So, when he won the World Heavyweight Championship at Wrestlemania XX, I knew it was time for a Pegasus Kid Wrestling Museum column. You're the man, Benoit. Few even come close.

Comments? Questions? Feedback? Send them all to Trophar@Lycos.com