On the WWE roster, there are a few gems. Wrestlers who consistently have good matches and can work with nearly anyone to that positive end. Gems with the polish and the sparkle to catch our eyes. Then, there are the diamonds in the rough. The superstars hidden for a time but soon to shine their light over the wrestling world. In the wake of the WWE draft lottery, the company split up my favorite tag team. Now in singles competition, these diamonds hide no more. Not that it prevented smart wrestling fans from appreciating them before. Anyone with a taste for ring mechanics and technical wrestling skill knew they both had the stuff to be breakout stars, but when in a tag team, the casual fan may not be able to see it.

They will, though. Charlie Haas and Shelton Bejamin are diamonds in a WWE filled with too many common stones. They have arrived in singles competition, and I couldn't be happier. Some may ask "Where did they come from?" and more importantly "Where are they going?"

I am happy to oblige.

Charlie Haas was born in Edmond, Oklahoma. He became a wrestling state champion and went on to improve his skills in college at Seton Hall University in New Jersey with a full athletic scholarship. While there, he became a four-year starter and two-time Big East Champion as well as being named an Academic All-American. After reaching the independent professional wrestling shows, Charlie and his brother Russ formed a strong tag team that many believed would catapault the two Haas brothers into the big leagues one day. 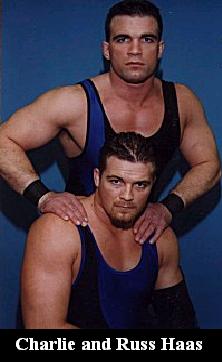 Charlie and Russ were mainstays at HWA, working with the likes of Chris Kanyon, Mike Sanders, Reno, Jimmy Yang (now Akio), and many more. The WWE even took notice and gave the Haas brothers a spot on the 4th Annual Brian Pillman Memorial Show. They were on top of the world. Tragically, it all came crashing down. In December of 2001, Russ Haas died in his sleep due to heart complications. He wasn't even thirty years old. Charlie was devastated but continued to wrestle, giving tribute to his fallen brother by writing the word "Russ" on the tape on his hands during every match. He is still seen doing this today.

Finally, Charlie Haas would get his shot in the WWE. Haas became part of Kurt Angle's Team Angle tag team along with Shelton Benjamin. They dropped Angle when the Olympic champion turned babyface and were known as the World's Greatest Tag Team. Recently, partner Shelton Bejamin was drafted to Raw, leaving Haas alone in singles competition on Smackdown. Sounds like it could be good news, right? It is if it will be done right. I have my fears, though. Haas has been given a good spot on Smackdown but he is somewhere around the top of the bottom or the bottom of the top. Observe my cruedly-designed but reasonably adequate Smackdown Babyface and Heel ranking chart... 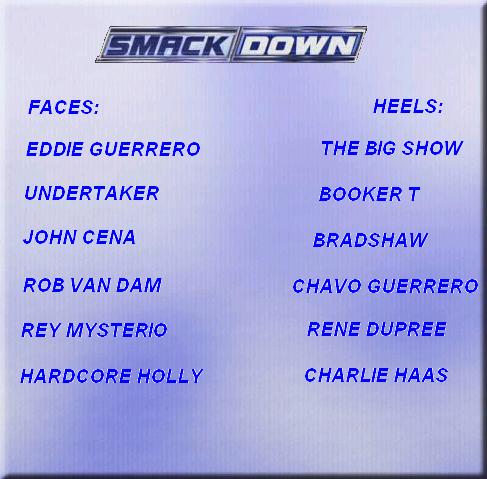 Draftee from Raw "French Phenom" Rene Dupree has been given more of a push than my boy Charlie. It is being said that Dupree will face John Cena for the US Championship soon. I admit Dupree may have potential, though. The Big show, I confess, is hard to take out of the big picture so soon. Also, I'll not say an unkind word about the hard-working veteran Booker T. I do take issue, however, with shoving the absolutely terrible Bradshaw down our throats as a top contender to Eddie Guerrero's WWE Championship. Instead of pushing an established heel and credible gold-wearer like Haas, the WWE bookers decided to turn Bradshaw heel and pretend A) we care, and B) he's a good worker. The only good news out of this is that Bradshaw may win a toaster if he fails to ignite his 100th awful push. He's in his late thirties. He isn't going to get any better.

Instead of giving Haas the ball, he jerked the curtain with Rob Van Dam and did the job. With Brock Lesnar gone and Kurt Angle injured, this would have been the perfect opportunity to give someone on Smackdown of similar collegiate amatuer wrestling ability the chance at the top. Does the WWE actually view Bradshaw and Big Show as more credible wrestlers than Charlie Haas? Unfortunately, I believe the answer is yes. Haas is a superb athlete, but I'm afraid that he doesn't have enough charisma (unlike Benjamin, but we'll get to that later) to receive the God push to the top, however deserving he may be. Bradshaw can't wrestle his way out of a paper bag (why one would do that I have no idea), but he can cut a promo from time to time. Also, he's a big ol' hoss, remember? The Big Show is mediocre at best in the ring, but he has the look.

I fear for the future of Charlie Haas. He's not young (early thirties) enough to have as many chances as a Dupree or a Cena. Though, instead of simply complaining about it, which I do enjoy in some way, allow me to paint my own picture of what the WWE could do to give this wrestler the push he needs...

Smackdown. Thursday night. Charlie Haas is fuming about his loss to blue team newcomer RVD. Kurt Angle walks up to him and says he is disappointed in his former teammate. "I lost, but it was a fluke." says Haas. "No," says Angle. "I'm not disappointed that you lost. I'm disappointed because you're sitting here crying about it. If you want to be a name in this business, you have to get out there and make an impact." Haas scratches his chin and we go to commercial break. When we come back, John Cena is defending his United States Championship against someone. Doesn't matter who. As the match nears its climax, Haas charges into the ring and assaults John Cena, ruining his match. Kurt Angle watches backstage and smiles. This sets up a midcard feud of John Cena vs. Charlie Haas to culminate at May's Smackdown-only Pay-Per-View. After some time, Haas could move up from the top midcard spot to a certified main eventer. It would be so simple. 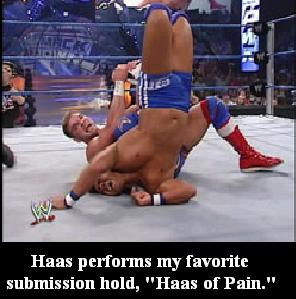 Bradshaw can't wrestle. Big Show can't even move. Booker T is said to be retiring soon. Kurt Angle's future in the ring is in question. The WWE's Smackdown bookers better think about giving Charlie Haas his chance. Not only because he can make it work, but also because, quite frankly, who is left?

Whenever I spoke of the World's Greatest Tag Team, I would point to the Shelton Benjamin and say he is my favorite of the two. This is still true. As much as I like Haas, I like Benjamin just a tiny bit more. He is about everything Charlie Haas is but with more "style" in his ring-work (which can be a positive or negative, depending on the situation) and with far more charisma. Not a huge factor in choosing my favorites, but it's something. A few weeks ago, while watching Smackdown with another wrestling fan, I remarked "Benjamin is going to be main eventing in maybe two or three years." This was before the draft and before his tag team broke up. It may be far sooner than that. 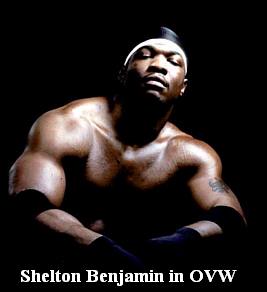 Shelton Benjamin was born in Minneapolis, MN. In high school, he was a star in football, track, and most importantly to us, wrestling. He was a two-time state champion, and when he made his way to the University of Minnesota, he was a two-time NCAA All American. What's more, he was a wrestling coach and trainer. Professional wrestling called, and in time, Shelton Benjamin worked for Ohio Valley Wrestling, which is WWE's training ground. He tagged with fellow University star Brock Lesnar and made a formidable duo. Benjamin was given his chance on Sunday Night Heat after some time passed. I still remember seeing his debut. He was backstage saying it's "all about the Benjamin."

After his stint with Charlie Haas on Smackdown, Benjamin was drafted and is now a big name on Raw. A big name already? Yes, he is. That is how you push someone, WWE. Why can't you do the same with Haas? Alright, alright. Enough whining. I'm not upset. I'm pleased as could be that Shelton Benjamin is now behind a monster push to the top. Here's my post-draft Raw chart... 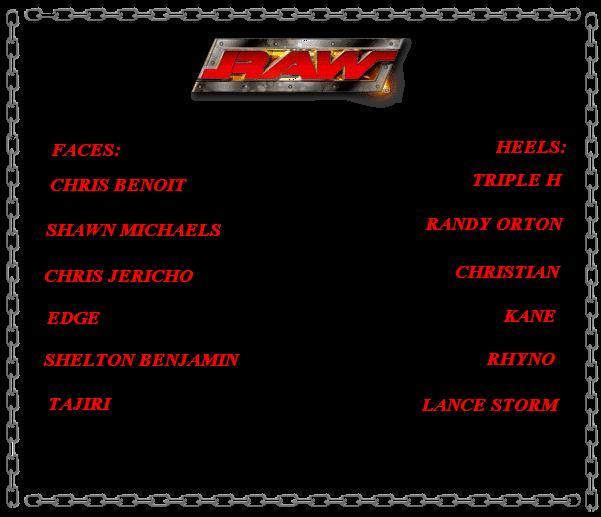 Shelton Benjamin is neck-and-neck with Edge for the top babyface midcard role. So sudden? Well, that will happen when one bests Triple H in the Raw main event and is given the nod from Hurricane, Mick Foley, and World Heavyweight Champion Chris Benoit. It was a wonderful match too. Good psychology, timing, and some strong submission wrestling and fancy moves. Benjamin's Dragon Whip (even though JR neglected to call it by name) is a fun, although a bit contrived, spin kick that dazzles the fans. Those in attendence went bonkers when Benjamin won. I did too.

Here is my vision of what I would like to occur: Triple H is so distraught over his loss that he takes himself out of the Backlash main event to battle Benjamin on PPV instead and show the world he is still The Game. Win or lose, it doesn't matter. Benjamin will have made it. Then, after Randy Orton is done with his feud with Foley, Triple H would unleash his young Evolution proteg