Ring of Honor has sufferred some great losses in the last two months. A scandal involving now former co-owner Rob Feinstein, talent cancellations at the last minute, and most recently, a negotiation impasse with NWA-TNA that had TNA pull all their contracted wrestlers from upcoming ROH shows. This includes, but is not limited to, AJ Styles, "Fallen Angel" Christopher Daniels, and Jerry Lynn. It seems TNA used some fishy tactics to try and make ROH financially responsible for TNA's success or failure. ROH obviously refused this power play and was forced to scramble to remake all upcoming cards with Styles, Daniels, and Lynn gone.

This is not, however, a column about that incident.

It is about change. Ring of Honor, the #2 wrestling promotion in America in terms of event attendance, is changing. Two of their top stars are gone. A plethora of brand new talent have been added to their shows, including Austin Aries, Roderick Strong, and the Havana Pitbulls. The promotion has even expanded out West, appearing in Chicago, Illinois and St. Paul, Minnesota over this weekend, even calling the shows "ROH Reborn." TNA has never even left Tennessee...but I digress. My point is that with the exception of a few losses in talent, ROH has rebounded and changed to suit their needs. It is often said that what doesn't change will die. In the world of professional wrestling, where fans can get bored rather easily, that axiom should be taken very seriously.

That is why I propose that long-running Ring of Honor Champion Samoa Joe should drop the title to another ROH wrestler. Now. 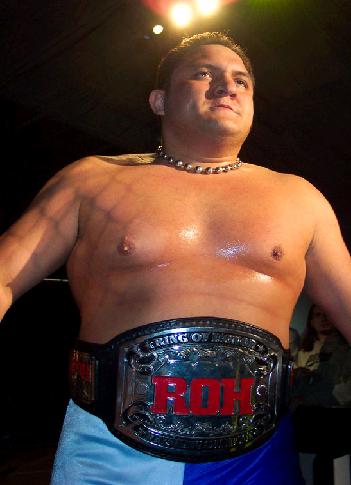 Ah, Samoa Joe. 6'2". A rotund 280 lbs. Yet, he is not the average big man. He moves about with surprising speed. He utilizes submission holds and no, not just a bear hug. He even towers over the other ROH stars, as most of them are under six feet and 230 lbs. It gives him the appearance of a monster. Samoa Joe debuted on the independent wrestling scene in 1999, and in his short career, he has already performed all over the world. One would think his remarkable credentials and his ability would make me keen on keeping the belt on this athlete. I would...but as of this writing, he has held the championship for exactly one year, one month, and three days. It is time for a change. I know it. The fans with whom I converse know it. I suspect Samoa Joe knows it too.

During his title reign, Samoa Joe has bested all of the following: Doug Williams, Zebra Kid, Homicide (twice), Dan Maff (twice), Paul London, BJ Whitmer (twice), Christopher Daniels, Ares, Jay Briscoe (twice), AJ Styles, Mark Briscoe, Balls Mahoney, Low Ki, and Matt Stryker. He has dominated the Ring of Honor roster for over a year. So, when he loses the title, it will be a monumental event. Whoever beats him won't just be receiving a push. More like a catapault. That still leaves the burning question: Who is going to win the ROH Championship from Samoa Joe? Who is going to lead the promotion in the second half of 2004? Who will help Ring of Honor recover from their losses and keep the storylines and feuds fresh and exciting?

In my mind, there are four top contenders to the Ring of Honor Championship. I cannot add AJ Styles or Christopher Daniels due to recent contract restrictions. Nor can I add "American Dragon" Bryan Danielson now that a good deal of his focus is working with New Japan. Former ROH champ Low Ki has distanced himself from the company. Jay Briscoe seemed the man to take the title, but his long feud with Samoa Joe just hit its blow-off point last month. Who is left? The four men who I see as both the most likely and most deserving of the title... 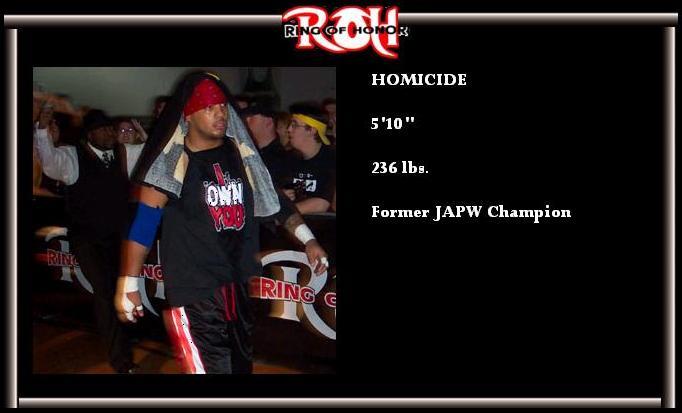 Homicide. "The Notorious 187." Don't let the man's eye-rollingly farcical monickers fool you. Homicide is no gimmicky "street hood" wrestler who can't work. Homicide can go. While not the greatest high-flyer, the smartest mat technician, or the ultimate hardcore wrestler, he can still do all these things very well, making him a Jack of all Trades wrestler. He has gone hardcore with a barbed-wire match against Steve Corino. I myself am not a fan of such matches, but many fans are, so Homicide can deliver that. I've seen him fly and mat wrestle first-hand at the shows I've attended. He went move for move with Benoit carbon copy Josh Daniels. He has put on very strong matches with BJ Whitmer, John Walters, and so many more. Most importantly to the ROH bookers, he is over with the fans. Massively. Every show I've seen in which Homicide was featured, he received some of the loudest pops of the night if not the loudest of all. People love him, as well they should.

Should Homicide be Ring of Honor Champion?

CONS: Not strong on the microphone, which is why manager Julius Smokes needs to speak for him. 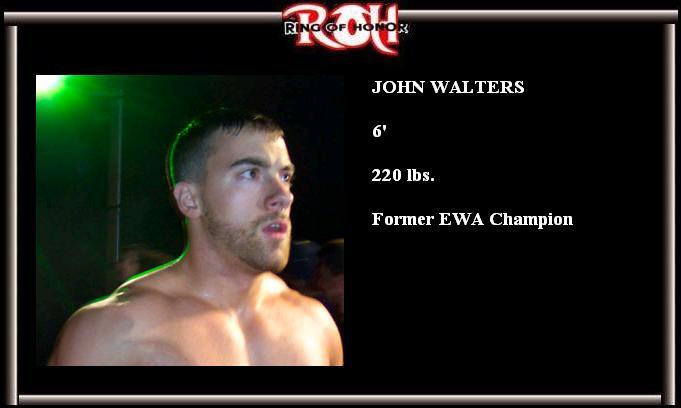 John Walters. Possibly the best pure wrestler on the ROH roster. In 2003, the New England Independent named Walters the best indy wrestler of the year. In 2004, he competed in ECWA's prestigious Super 8 Tournament. Even the WWE has taken notice as they have given him matches on Velocity and even one on Smackdown recently against the Big Show. Walters is a mat technician who can hit hard and fly (sparingly) when the match calls for it. Like many young technical wrestlers, his style is very much reminiscent of Chris Benoit. Walters pulls submission holds out of nowhere and counters so gracefully that it is difficult to tell when one hold ends and the other begins. He is the perfect pure wrestler of Ring of Honor.

Should John Walters be Ring of Honor Champion?

PROS: Flawless technical wrestling. Over with the majority of the fans.

CONS: He doesn't work all styles very often, and perhaps because of that, some fans find him boring. Doesn't give strong promos. He might be better suited to be Pure Champion rather than hold the top belt. What's more, WWE seems to be interested in him which could account for why his push in ROH hasn't produced a title shot yet. 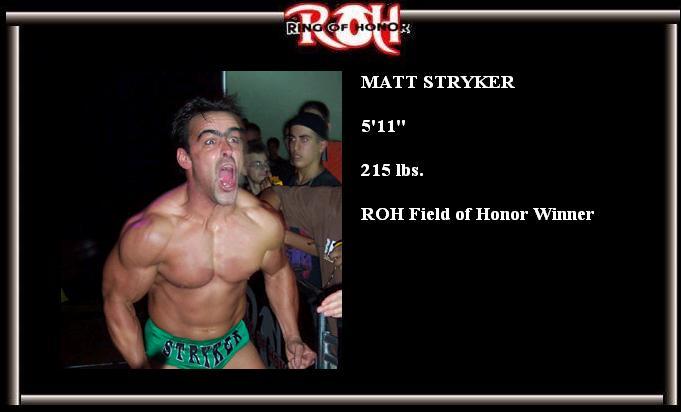 Matt Stryker. The golden boy of Ring of Honor. He has received a massive God push ever since joining the roster. He won the Field of Honor competition which took place over much of 2003. He went to the semi-finals in the Pure Wrestling Tournament in February. More recently, he was the latest challenger to Samoa Joe's title after winning the #1 Contender Trophy in a match against John Walters. He combines mat wrestling with some strong style kicks to put on a very realistic show. His unibrow makes him instantly recognizable to even casual fans. I recall that during a four-way bout in Glen Burnie, Maryland earlier this year, a fan cried out for him to shave it off. Stryker replied "I will not conform!" I love this guy.

Should Matt Stryker be Ring of Honor Champion?

PROS: Great worker in terms of technical mat wrestling and tough, strong style. Over with a lot (but not all) of the fans. His Field of Honor win makes him a realistic contender to the championship.

CONS: For reasons I do not entirely understand, he isn't as over with the crowd as ROH had hoped. He has his fans, but lately, he has been receiving negative reactions from certain people in attendance. Perhaps because some fans believe his uberpush should have been used elsewhere. Maybe his unibrow turns some people off. The people as a whole may not accept him as ROH champion. 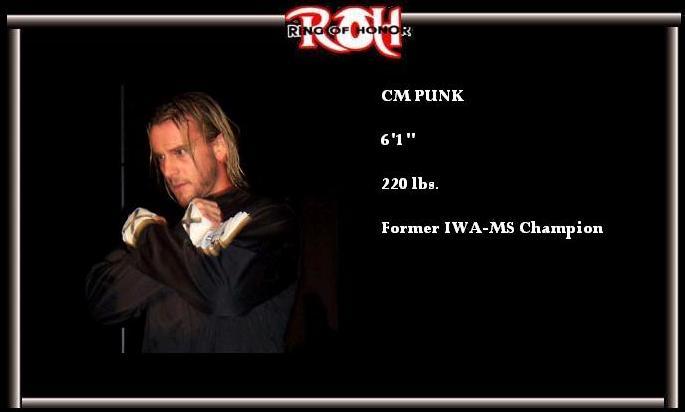 CM Punk. Former star of IWA-Mid South, RCW, and NWA-TNA. Now quite possibly the top name in ROH's regular roster. He is the consummate heel. As he puts it, he can make the crowd hate him with just the expression on his face. He can do so much more than that, though. His promo work is amoung ROH's best. His "gimmick" is actually his real lifestyle: Straight Edge. "I'm drug free, I'm alcohol free, and I'm better than you!" His heel heat is so great that even fans of his work express a powerful hatred for his character at the shows. During Ring of Honor's Main Event Spectacles show last year, a fan screamed "Die, die, I want you to die!" in his face for about a minute while Punk simply stood still and gave him a death stare. In the ring, he is top-notch. He works a traditional style mixed with some stiff kicks and punches.

Should CM Punk be Ring of Honor Champion?

PROS: Ultimate ROH heel. Most well-known indy star of the four mentioned. Strong worker. Good promos. In the past, he has worked 45-minute and 93-minute matches. Obviously, he can main event.

CONS: So over with the crowd that some say he doesn't need to be ROH Champion and that someone else should have it to elevate their status.

Of all mentioned, CM Punk is the wrestler I want most to be Ring of Honor Champion. I understand the argument that the title has, in the past, been used to put over someone on the cusp of the main event rather than a top star. However, after Samoa Joe's year-long reign as both champion and top star, is that true anymore? ROH needs both a change and strong leadership at this time. CM Punk makes the most sense to fill that role. Though, to be perfectly honest, I will happily take any of the four at this point. Samoa Joe's reign has lasted too long. I am desperate for a title change.

What do you think? I know there are some Ring of Honor fans who read my column. E-mail me at Trophar@Lycos.com with your thoughts and ideas. For now, I am off. Take care of yourselves. I'll be back in a week for Wrestling Museum.