Before Hell in a Cell, Chamber of Horrors, Scramble Cage, the Elimination Chamber, and various other bizarre steel cage variations, there was War Games. A steel cage match to top all others. The Match Beyond. Given birth in 1987 in the National Wrestling Alliance, it found new life in World Championship Wrestling and eventually, though perhaps unofficially, in Major League Wrestling last year. War Games was one of the strangest steel cage matches ever. It broke away from the standard cage match, so it could be argued that without War Games, we may not have Hell in a Cell today. We almost definately wouldn't have the Elimination Chamber, considering some of its rules are based on the old NWA tradition.

The steel cage match is synonymous with professional wrestling. It is the standard in brutal matches. While I personally have no great love for bloodbaths, when a cage match is done properly, it can be so much more than just brutality for brutality's sake. It has a huge place in wrestling history. You need only speak the words "steel cage" and even those who don't follow wrestling will know to what you're referring. Nobody says "steel cage" and thinks of water polo. It is partially due to War Games that the institution has thrived into the 21st century. 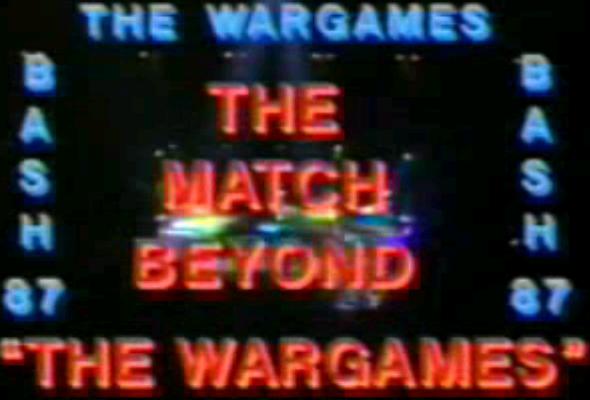 "So, what is a War Games match?" a younger fan might ask. Well, originally, it was a match between one version of The Four Horsemen (Ric Flair, Arn Anderson, Lex Luger, and Tully Blanchard) and J.J. Dillon vs. The Dream Team of "American Dream" Dusty Rhodes, Paul Ellering, Nikita Koloff, and the Road Warriors: Hawk and Animal. The cage is wide enough to consume two rings at once, which makes it easier for all ten men to wrestle at once. As far as the rules of the match, I'll leave the answer to the announcer at 1987's Great American Bash...

"The War Games consist of eight periods. The first period is five minutes in duration. Each team will be allowed one man in the ring at a time during the first period. After the first five-minute period, the referee will conduct a coin toss to determine who has the advantage. That is to say who can have two men in the ring and who can have one. After all ten wrestlers are in the ring, it will be time for the Match Beyond! Submission or surrender!"

The match begins with Arn Anderson and Dusty Rhodes. Anderson charges Rhodes with surprising speed for a big man. Lock-up in the middle of one of the rings followed by a hard trademark elbow from Rhodes to Anderson's skull. The Dream and Anderson now on opposite rings. Rhodes stands on the second rope inviting Anderson to come on over but the Horseman is reluctant. Finally, Rhodes decides to make his way over to Anderson instead, but rather than just walk over, he does so by balancing his 300+ lb. body on the second rope and stalking Anderson from above! Arn Anderson hesitantly walks over to the advancing American Dream until Rhodes leaps from the second rope, holds onto the top of the cage, swings over, and kicks his opponent down with a jumping boot. 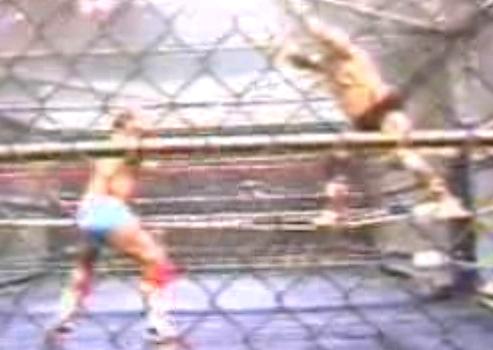 Anderson and Rhodes back on their feet. Lefts and rights thrown by each man but the Dream gets the advantage after a blatant low blow to Anderson. Dusty Rhodes is over as a babyface despite the shady punch to Anderson's nether regions. "Hitting him where it hurts," exclaims the commentator. "There is no referee inside!" The cameras give us a view of the Horsemen on the outside arguing about the questionable blow. The referees stay out of the cage and tell the Horsemen to take a seat. Meanwhile in the extra-large steel cage, Anderson launches Rhodes into ropes, lowers his head in an attempt to back body drop the American Dream, but Rhodes catches Anderson with a stiff DDT.

Rhodes takes a moment to catch his breath but then goes right back to work on Anderson. Rhodes rakes Anderson's face on the steel mesh. "I believe Anderson has been lacerated!" cries the commentator. Once Anderson is released from Rhodes' grip, he blindly takes a swing at the air and flops onto the mat. After another exchange, Double A pounds on the cage trying to escape. The two men lock up again, and just when Anderson looks to be taking the advantage for the first time in the match with a snapmare, Rhodes gets back up, knocks Anderson down flat and locks in Four Horsemen leader Ric Flair's figure-four leglock on the bleeding Arn Anderson! 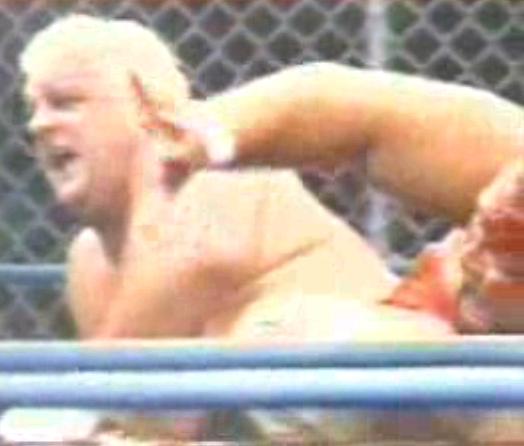 As the first period ends, the referee makes a coin toss in the Four Horsemen side's favor. In charges Tully Blanchard with so much gusto he almost trips over the ropes. Blanchard and Anderson, collectively known as The Brainbusters, go to work on the American Dream two on one. Rhodes shakes off the attack and bionic elbows the tag team down to the canvas. It doesn't last, though. The Brainbusters get up and begin to beat Rhodes senseless with a series of punches and boots. Soon the Dream on his back staring at the top of the cage. The Horsemen have the advantage.

To punish Dusty Rhodes for utilizing Ric Flair's finishing submission hold, which may have been tantamount to blasphemy to Flair the wrestling god, Tully Blanchard wraps that very manuever around Rhodes while Arn Anderson holds Rhodes' arms down on the mat. Great tandem offense by the Brainbusters. Flair, on the outside, shouts his approval with his standard "Wooo!"

The second period ends. Like an angry bull, Animal of the Road Warriors (better known to WWF/E fans as the Legion of Doom) enters the cage and tears Blanchard and Anderson apart with hard clotheslines. Blanchard is in serious trouble. Animal, so enraged, grabs Blanchard and slingshots him into the cage...but he doesn't let go of his legs! He performs the slingshot again, and again, and again, making Blanchard very familiar with the feeling of steel against skull. To the best of my recollection, I've never seen rolling slingshots before or since. Rhodes and Animal pounce on Blanchard, sending him hard punches at the same time. After some more brawling, Blanchard and Anderson are down.

The period ends. "Nature Boy" Ric Flair enters the War Games. No strutting right now. He is all business. Anderson and Flair team up to whip Animal into the steel cage. Flair gyrates and yells to the crowd. Okay. So, not all business. 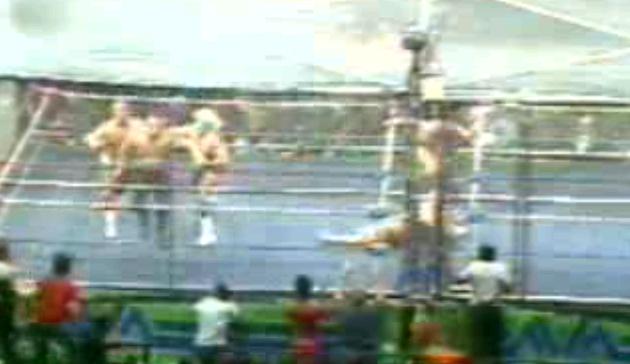 Flair holds Animal while Anderson pummels him with his bulky arms. Suddenly, from out of nowhere, the American Dream gets his second wind! He tackles Anderson from behind and goes to work on Flair. The match starts to get a little ugly as Flair low blows Rhodes and at almost the exact same time, Animal perfoms the same move to Blanchard. Flair takes the opportunity and begins his trademark chops against the massive chest of Dusty Rhodes. "Take the advantage!" demands the commentator. Flair does just that and grinds Rhodes' face against the steel.

The period ends as Nikita Koloff of the Dream Team enters the cage. Anderson and Flair immediately go after him and Irish whip him into the turnbuckle. Koloff uses the momentum of the crash against the turnbuckle to charge the advancing Flair and Anderson with a double clothesline. For the next few minutes, everyone seems to take turns tossing each other into the steel cage. Especially Koloff. Flair goes after him, but Koloff seems to let the Nature Boy's chops roll off his huge shoulders. Flair, playing the cowardly heel, runs away much to the grins of the crowd. In classic Flair form, he begs off.

The bell sounds as the next period begins. Lex Luger of the Four Horsemen makes his way into the double rings. While perhaps not the best worker of the old NWA, Luger tried to make up for it with his incredible physique and ring presense. He scoop slams powerhouse Nikita Koloff as if he were a child. 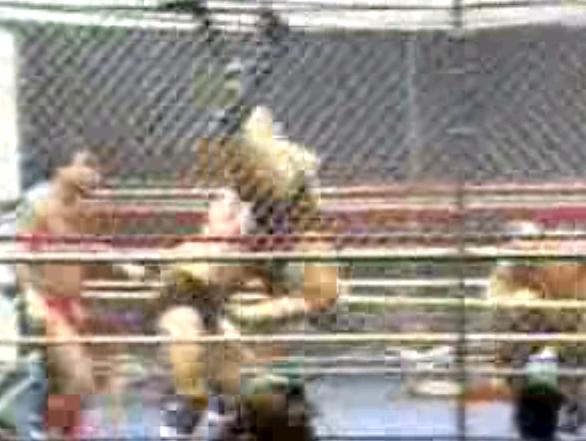 Koloff rather quickly becomes the Horsemen's whipping boy. Blanchard holds him in piledriver position while Flair leaps off the top ropes and spikes Luger's head into the canvas. Twice! Dusty lays on top of Koloff to protect him from the Horsemen's boots. The commentators say that Koloff has a neck injury. "Nikita is really hurt. He's almost unconscious over there."

After a few minutes, the period ends, and Road Warrior Hawk tears into the ring. Blanchard is picked up in gorilla press position and is dropped head-first onto a turnbuckle. Hawk clocks Luger and Anderson before going after the Nature Boy. "He's a one-man wrecking crew!" screams our announcing team. After about a minute, Flair finally manages to corner Dusty Rhodes with the dreaded figure-four leglock. Remember, this is a submission or surrender match, but that cannot happen until everyone is in the cage. 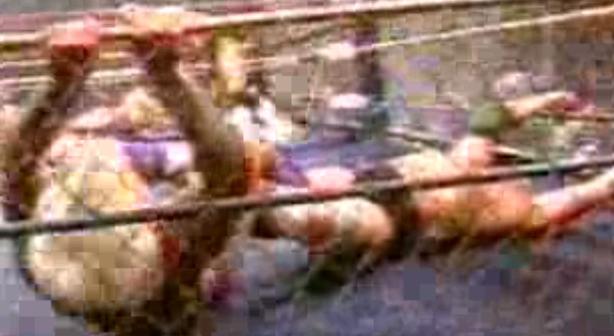 The penultimate period begins as J.J. Dillon enters the cage. He tries to give Hawk a hard elbow, but the Road Warrior no-sells it and just stares at him. The crowd laughs. Hawk begins to beat the stuffing out of him until Ric Flair makes the save. At this point in the War Games, it degenerates into an insane brawl more than a wrestling match. Flair is busted wide open.

Finally, the last wrestler, Paul Ellering, enters the cage. The announcer lets us know that "The Match Beyond" has truly begun! Ellering gives Dillon an inverted atomic drop, but for the most part, everything at this juncture is a brawl. Just too many in the ring to have any real sense of order. Dillon begins to bleed. In fact, darn near everyone is. Poor J.J. Dillon must also take a variation of the Doomsday Device from Hawk and Animal. He lands hard. After some choking for good measure, Dillon surrenders! The Dream Team wins the War Games!

This isn't the end of the "Nature Boy" Ric Flair and "American Dream" Dusty Rhodes feud. It goes on for quite some time. I had the occassion of seeing Rhodes in New Jersey recently. I swear, that man is the only wrestler I know who can get away with exposing pectorals of that size and still be cheered heavily. He is something else.

Thank you for joining me for this Wrestling Museum match. I'll be back later this month for a tribute to one of the most talented rising stars of professional wrestling today. I'll see you soon.

Complain to Leon Thomas about the lateness and the picture quality of this Wrestling Museum match at Trophar@Lycos.com