- Big Show did not appear at Sunday night's SmackDown live event from Louisville, Kentucky. Wade Barrett filled in for him, losing to Alberto Del Rio in the champion vs. champion match.

- With Rey Mysterio still out of action, Sin Cara continues to team with the Great Khali at SmackDown live events.

Graves tweeted this picture on Sunday of himself on the way to the ring with the hashtags #FilthParade & #StayDown: 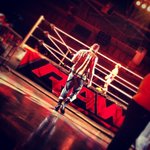