He hates wheels, he's made that abundantly clear over the past several weeks. A cursed Johnny Gargano can add yet another reason to loathe the wheel after tonight's NXT.

NXT North American Champion Johnny Gargano kicked off the November 11th edition of WWE NXT on USA Network standing inside the ring with his former arch-nemesis, a wheel. The wheel contained the names of potential competitors for Gargano to go head-to-head with for the first match of the evening, where Gargano would defend his brand new NXT North American Championship title that he had "earned" at the NXT Halloween Havoc pay-per-view (with the help of Ghost-face).

After delivering a promo in-ring about his new found love for the wheel, even going as far as to demand audience members "not talk about the wheel like that" as he prepared to find out the name of his competitor for the evening by spinning the wheel of potential competitors for a match against Gargano for the North American title. Gargano said he would break his "bad-luck" streak by proving he could retain the title following a victory. So with confidence... he chose to, "SPIN. THAT. WHEEL!" The wheel spun as Gargano removed his hand, and he watched confidentially as it went round and round. Finally the wheel slowed, but then spun backwards, hesitating on Damian Priest's name, then spinning the other direction hesitating on Tommaso Ciampa's name... then it finally stopped on the name "Leon Ruff". 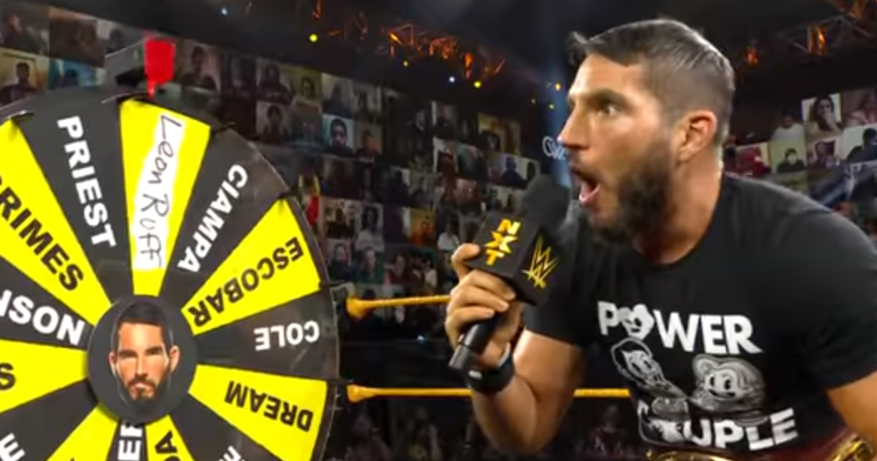 In the 9 matches recorded for Leon Ruff in WWE... Leon Ruff had a 0-9 losing streak, so when Johnny Gargano spun the wheel of competitors inside the ring to kick off NXT, Gargano thought he definitely had a shoe-in to break is bad luck streak with retaining championships in the NXT.

Gargano feigned surprise as the music sounded for Leon Ruff who at that point was 0-9 in the WWE, Ruff made his way to the ring where Gargano even stopped to pose with Ruff in the center of the ring and even encourage him. Gargano maintained control in the match, even as it spilled out to ringside where Gargano mocked former NXT North American Champion Damian Priest who was standing behind the plexiglas. Priest circled around to standing behind Gargano as Gargano trash talked into the camera, continuing to mock Priest.

Gargano turned around and was shocked to see Priest face-to-face so Gargano quickly re-entered the ring where Ruff got a quick roll up for the two count. Gargano still didn't have his baring's about him when he went for a Clothesline that turned Ruff inside out. After taunting Priest by saying how easy it is, Gargano sets up for a kick, but Ruff ducked under and hit the crucifix bomb for the three count pin and win!

Ruff quickly rolled out of the ring, not sure himself what had just happened, as he was announced as the NEW NXT North American Champion! A struggle ensued between the referee and a visibly upset Gargano as he tugged back and forth for the title. The referee then exited to ring and presented the North American Championship belt to Leon Ruff who was still in shock on the ramp.'

Damian Priest met the new North American Champion on the top of the stage and congratulated him, still all smiles as he placed the title around Ruff's waist, then raised Ruff's hand in victory (while the belt fell to Ruff's ankles due to his small stature. Ruff quickly grabbed the title from around his ankles and lifted it back to his waist as he followed behind Priest to the backstage area, leaving Gargano to throw an outright tantrum inside the ring.