Here are some more WWE tweets regarding the new "Paul Heyman Guy" who will be revealed on tonight's WWE RAW:

Michael Cole: "Rumors flying backstage at #RAW that @HeymanHustle is about to add client number 3! Who will it be. Heyman is here!"

Justin Roberts: "Walked out of locker room...We're all wondering if @HeymanHustle will be adding a 3rd client to his already dangerous alliance 2night? #RAW"

Joey Styles: "Could @HeymanHustle's new client be an announcer? Paul's @WWE politically incorrect truth should be heard throughout #RAW. #ImAPaulHeymanGuy" 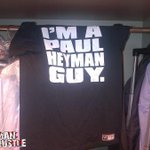