- After visiting Dr. James Andrews earlier today, injured WWE superstar Rey Mysterio tweeted the following update on his condition and says he still plans to be back in action this summer:

"Great news today with Doc Andrews! Revisit on the 19th of June for a minor procedure and still trying to b back in the ring by late August!"

- Former WWE superstar MVP, who has been rumored to be returning to the company, tweeted on Monday night that he is not Paul Heyman’s new client:

- WWE announcer JBL tweeted the following picture on Monday night of his broadcast partner Michael Cole getting “made up” before RAW:

"This is what I have to put up with!!! @michaelcole @wwe" 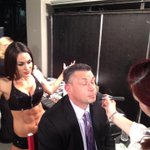