IMPACT Wrestling presents it's No Surrender 2021 pay-per-view event scheduled for tonight Saturday, February 13, 2021 beginning at 8/7C airing from the Skyway Studios Arena in Nashville, Tennessee. The 2021 edition of IMPACT Wrestling's No Surrender 2021 broadcasting will mark the 13th event under the "No Surrender" chronology and will be airing exclusively on IMPACT Plus; or can be purchased individually through the FITE Network.

To Subscribe and lock in your front row seat for tonight's IMPACT Wrestling No Surrender 2021 pay-per-view click here! One subscription plan gives you access across all your streaming and wireless devices (including but not limited to iPhone, AppleTV, Android, Amazon Fire TV, Roku TV, and Android TV!) for your viewing convenience! Also be sure to join us RIGHT HERE at Rajah.com for the full LIVE results and coverage starting at 8:00 p.m. EST!

Advertised for the No Surrender 2021 pay-per-view event, tonight's IMPACT Wrestling will feature Tommy Dreamer's 50th Birthday celebration which includes his title shot as the IMPACT World Champion Rich Swann puts his championship on the line in honor of Dreamer's "golden birthday"! 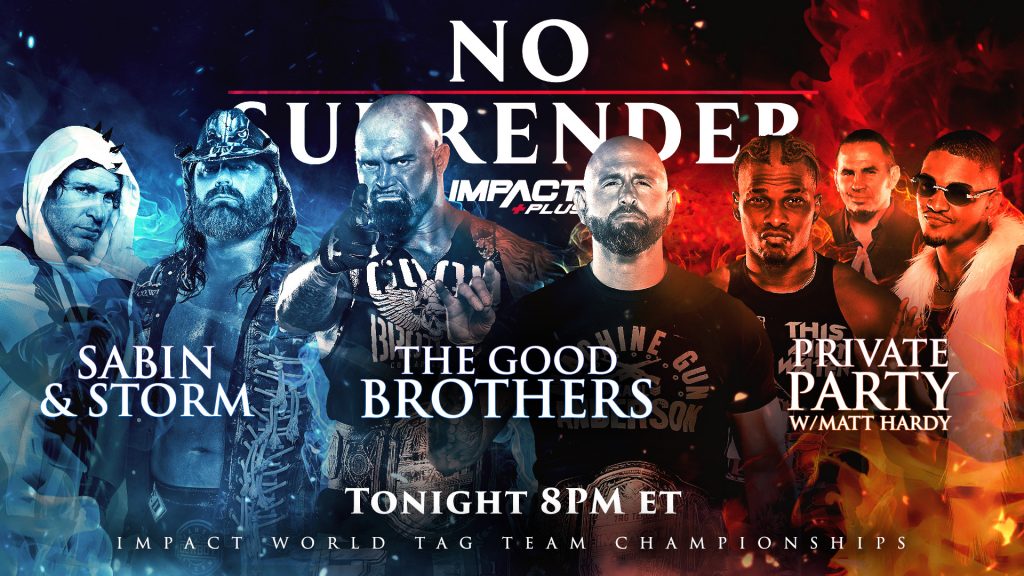 Triple Threat Revolver Match
(To Determine X-Division Championship #1 Contender)
Ace Austin vs. Blake Christian vs. Chris Bey vs. Daivari vs. Josh Alexander vs. Suicide vs. Trey Miguel vs. Willie Mack
(**Triple Threat Revolver Match Rules -- Three competitors start the match, and a new competitor will enter after someone is eliminated until everyone has entered. The final three competitors will battle until there is a winner, by pinfall or submission.)

Jake Something vs. Cody Deaner